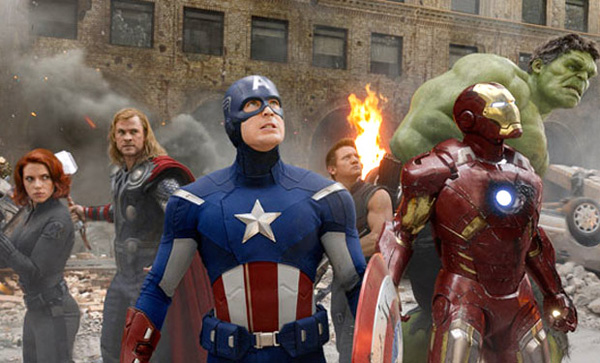 Making a movie with an ensemble cast composed of beloved superheroes must present an interesting challenge to a scriptwriter. He has to give each character room to breathe while balancing all of the good guys against the one or two baddies who darken the tale. I'm pleased to say that the screenplay for "The Avengers" (2012) struck a decent balance, although perhaps at the cost of story logic: I was never quite sure whether the principal bad guy, the Asgardian Loki, was going to keep the Tesseract-- an extradimensional power source-- for himself or hand it over to The Other, i.e., the shadowy boss alien who had promised Loki an armada of Chitauri* warriors at the beginning of the film.

The basic premise of "The Avengers" is simple enough: a wormhole, powered by the aforementioned Tesseract, is set to open a gateway that will allow an invading alien force to swoop in and conquer Earth. Nick Fury, director of S.H.I.E.L.D. (Strategic Hazard Intervention Espionage Logistics Directorate, if you must know), has the difficult task of rounding up "Earth's mightiest heroes": the Hulk (Dr. Bruce Banner when not raging), Black Widow (Natasha Romanoff, a Russian spy/assassin), Thor (fellow Asgardian and "brother" of Loki), Captain America (Steve Rogers), and Iron Man (Dr. Tony Stark). The movie takes us through several phases: every hero is intro'ed; they're all gathered; personality conflicts ensue; the conflicts are interrupted by Loki, and then comes the finale, in which the Avengers defend New York City-- and by extension, the world.

Rather than describe the plot in detail, I'd prefer to focus on other aspects of the film, beginning with character development. "The Avengers" is Joss Whedon's baby, and Whedon, who masterminded the quirky, wonderful "Firefly," is all about character. We quickly learn that Nick Fury (Samuel L. Jackson) is world-weary but still idealistic enough to believe in heroes and heroism. We discover that Black Widow (Scarlett Johansson) has a special talent for interrogation, placing herself at a seeming disadvantage while her interlocutor spills his guts to her. Tony Stark (Robert Downey) comes off as a raging egomaniac, but he and Bruce Banner (an appealingly diffident Mark Ruffalo) spend a few minutes nerd-bonding-- a fact that will affect the Hulk's behavior during the film's action-packed climax, when Iron Man is in serious trouble. Captain America (Chris Evans) is cool under fire, but Stark's snark gets under his skin. Mighty Thor (Chris Hemsworth) is simultaneously concerned for fragile Earthlings and amused by their pettiness. Hawkeye (Jeremy Renner)-- when not enslaved by Loki (Tom Hiddleston)-- is a very troubled soul. These characters come off as convincingly flawed. Even the deities are human, and thus relatable.

Along with good character development, "The Avengers" offers spectacular special effects. I was especially impressed with the S.H.I.E.L.D. helicarrier, which is a vast improvement over the 1998 TV-movie carrier pictured on the left. The 2012 helicarrier has heft, not to mention a slew of nifty features, such as two split-level runways, vaulted hangar decks, a control center worthy of Admiral Adama, and an impressive, ejectable holding cell built to contain gods and monsters. Below, a picture of the movie version of the helicarrier:

The Chitauri warriors register as little more than "Halo" villains, but I love-- love!-- those nasty, giant, fanged, flying armored worms. According to the geek set, those worms are called Leviathans, although we never hear the term used in the movie. Here's one of my babies:

Superhero stories are a form of modern mythology. The heroes incarnate certain traits and qualities-- usually those qualities that we find, culturally speaking, to be the best or most noble. The enemies of such heroes thus have to be commensurately potent, which brings us to the film's main villain, Loki. Let's put aside my confusion as to Loki's (and Asgard's) ontological status and concentrate on Thor's brother's role as a trickster figure. My problem with "The Avengers" is that Loki doesn't come off as much of a trickster in this movie, although he does engage in playground-style chicanery on at least two occasions. Instead, Loki is murderous (eighty victims in two days), vengeful, and power-hungry. Far from being a playfully transgressive figure whose loyalties and motives are impossible to fathom, this film's Loki makes very clear that he seeks planetary dominion, as well as the chance to humiliate his adoptive brother, Thor. There's nothing playful-- or particularly Norse-- about him.

Loki is also problematic in terms of the place he occupies in the film. He's the villain who enjoys the most screen time, but he's also second fiddle to The Other, who takes a moment to, for lack of a better term, bitch-slap Loki for the latter's insolence. Loki has been given the use of a large Chitauri invasion force, but do the Chitauri truly answer to him, or to The Other? It's all very confusing. And what about Loki's quest for dominion over Earth? Are the Chitauri there merely to help Loki achieve his goal, or is The Other himself interested in ruling Earth? In the middle of the ending credits, we see The Other reporting to his boss, a large, strong-jawed alien named Thanos, who may figure in a sequel down the line. The Other tells Thanos that Earth's humans have turned out not to be cringing wusses, and that to attack Earth is to invite death-- a claim that brings a hungry smile to Thanos's face. This scene seems to imply that The Other is interested in dominating our planet, which leaves Loki... where, exactly?

In any event, I don't think the main focus of "The Avengers" is the conflict between good and evil: it's the interplay between and among the heroes. This is essentially a buddy movie writ large, and the payoff-- the greatest moment of bonding-- comes at the very tail-end of the ending credits, when we see the Avengers, tired and perhaps a little shell-shocked, sitting in various slumped postures around a restaurant table and munching on shawarmas while a staffer sweeps the floor in the background. No one says a thing; it's all about the contented chewing. The scene is pure Whedon, and it speaks volumes for how close these characters have become. For my money, this was the best scene in the whole movie.

So all in all, I liked "The Avengers." While it isn't a perfect film, especially in its portrayal of the bad guys, it has its earnest heart in the right place. A student of mine saw it in the theaters, and told me that the audience cheered loudly with each successive exploit. I'm sure "The Avengers" was a great audience movie; it has strong, well-developed protags, striking visuals, plenty of humor, and a plot that, while not as coherent as it could have been, hurtles forward faster than Iron Man intercepting a nuke. Not a bad way to spend 150 minutes.

*"Chitauri" is an extraplanetary moniker that apparently means "gray and ugly." It's never established whether The Other is of the same race as the Chitauri, nor do we find out what the Chitauri get out of being used as chattel and cannon fodder. The script does an excellent job of guiding us through the tangled motivations of the good guys, but leaves the bad guys opaque.