I think the shepherd's pie went over well today. The boss did end up coming in; his wife seems to be OK, so by extension, he reasons, he must also be OK.

Let's get right into the making and serving of this dish. It's called shepherd's pie if it's made with lamb, cottage pie if it's made with beef, and hachis parmentier if you're making this dish in France. On various cooking videos, if the chef mistakenly calls his beef dish a "shepherd's pie," commenters will call him out and scream that it's actually a cottage pie! It was only recently that I learned the French term for essentially the same dish—the aforementioned hachis parmentier—which often translates as "French shepherd's pie." The twist is that, for French shepherd's pie, you can use beef, pork, or lamb. So a cook calling his beef dish a "shepherd's pie" might not be wrong from the French point of view. Whatever the nomenclature, a shepherd's pie is a fairly basic type of comfort food that can be prepped several different ways. Here's what I did.

Start with a meat layer. In my case, I combined beef and lamb, and so I think I'm already more in hachis parmentier territory than in shepherd's/cottage pie territory. I mixed ground beef and lamb, added local mushrooms (I normally avoid shiitake/pyogo in Western food, but I thought the mushrooms' pungency would enhance this pie), added tomato purée (passata di pomodoro), salt, pepper, dried-onion flakes, and various herbs like rosemary, thyme, parsley, and oregano. I dumped in a mess of white wine (you're normally supposed to use red, but I had a bottle of white open). I let all that boil down a bit, then added a not-quite-necessary cornstarch slurry to thicken the sauce up a bit more. It didn't change the overall consistency that much, probably because I stayed conservative in quantity.

The meat sauce is traditionally the bottom layer of the pie: 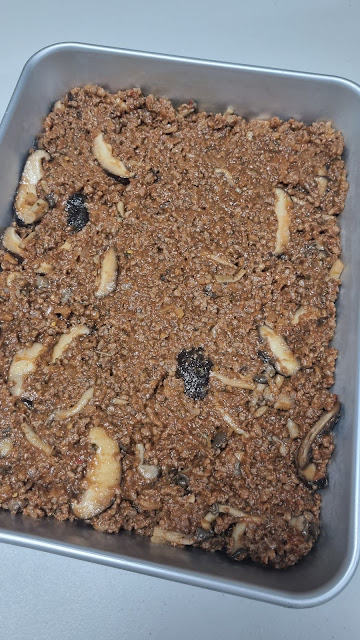 Meanwhile, I planned to make and eat my own personal-sized hachis, so I plopped some meat sauce into a smaller baking dish: 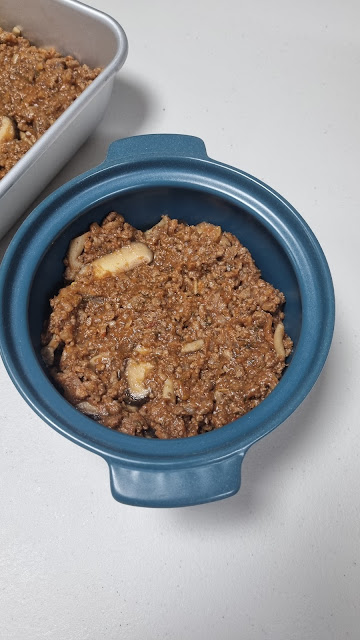 Next up: the peas-and-carrots layer. I had bought a huge bag of frozen peas while I was in Itaewon (along with the ground lamb). Before dealing with the peas, though, I had to prep the carrots: they needed to be peeled, then cubed, then boiled until barely soft. I had prepped the carrots the night before; when I thawed the peas in boiling water, I added the carrots and let everything warm up, then I drained the veggies, added salt and pepper and a little butter, and layered the whole thing onto the meat sauce. Et voilà: 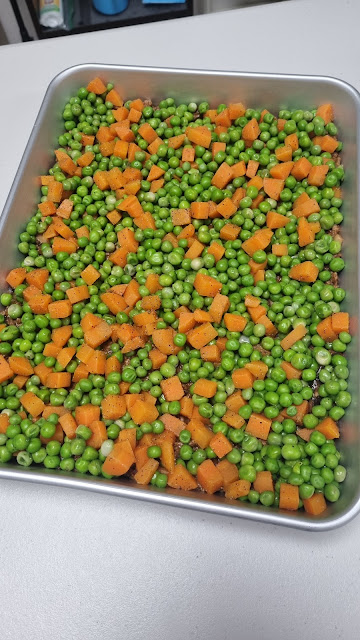 Same for the mini-pie: 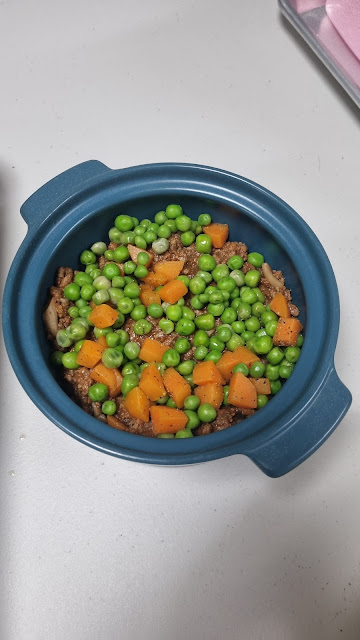 I had to peel, chop up, and boil my taters; I bought two bags' worth (5 mid-size taters per bag). As I was peeling the potatoes, I became a bit annoyed by how dimply they were; dimples and eyes make Korean potatoes a bit harder to peel. I had to resort to the potato-eye remover quite a few times. It took a while, but I got all ten taters peeled, chopped, and boiled.

Next, I had to turn this mess into mashed potatoes. I elected to use my regular potato masher, this time, instead of the ricer. Into the mix went salt, pepper, garlic powder, cream cheese, heavy cream, butter, 2 eggs, and a teeny bit of paprika just to wake things up a bit. Oh, and parsley to add flecks of green. I dolloped the mashed potatoes onto the veggie layer: 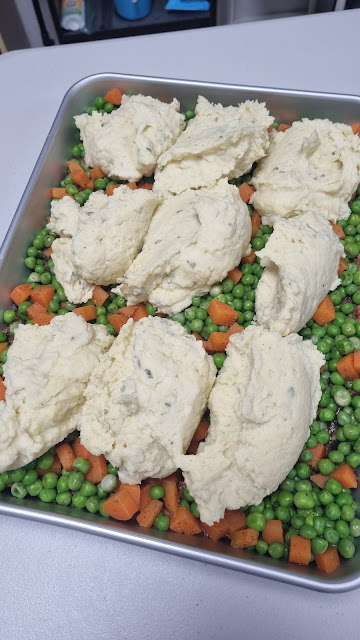 Same for Mini Me: 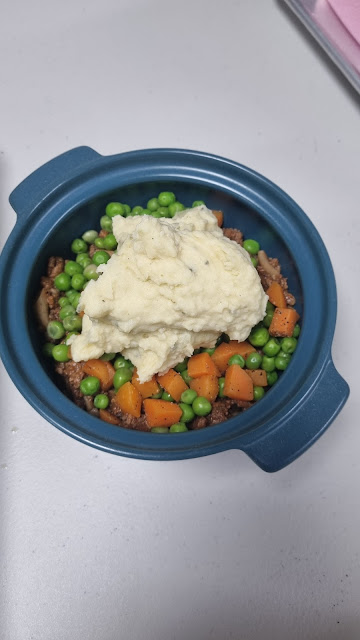 It was then a matter of spreading the potatoes out to make the mashed-potato layer. I did my best to get everything to the edges; I used forks to make sure the layer was nice and craggy: 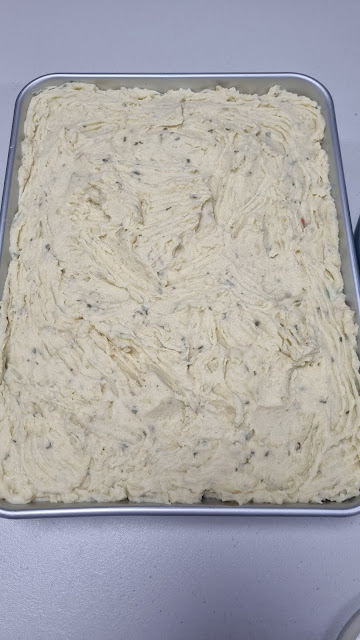 Same for the personal-sized portion, which was starting to look big: 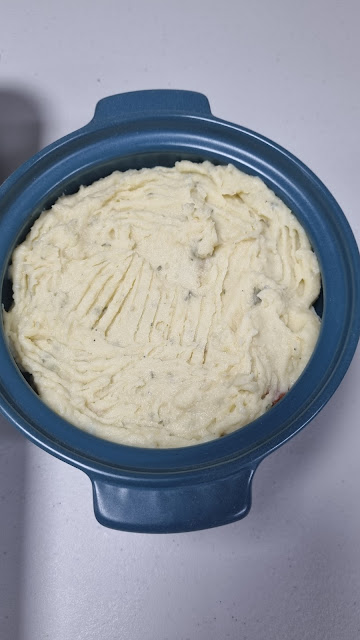 Off to the side was my grated English cheddar: 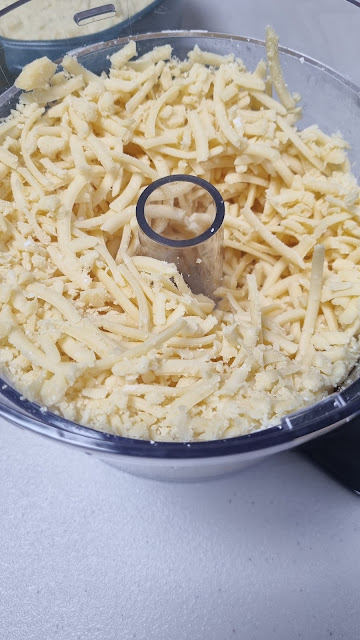 For both the small and large pies, I baked everything for twenty minutes at 350°F, added the cheese, baked for another twenty minutes, then broiled for five to ten minutes to get everything a little browner. Here's how the little guy turned out: 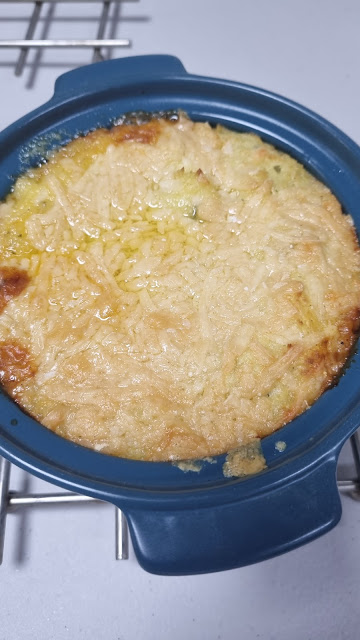 Here's what the little guy looked like when halfway eaten: 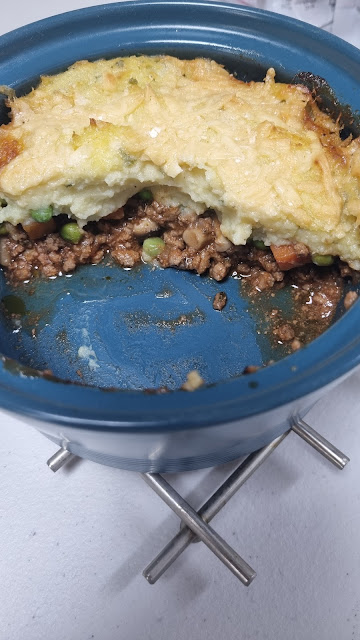 I took the large shepherd's pie into the office today (it was heavy), having let it cool overnight so as to avoid the problem of runniness. As you see below, the layers look pretty distinct: 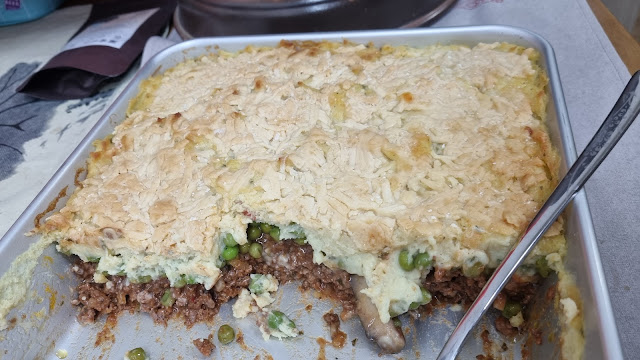 Here's one angle of the portion I ate for lunch: 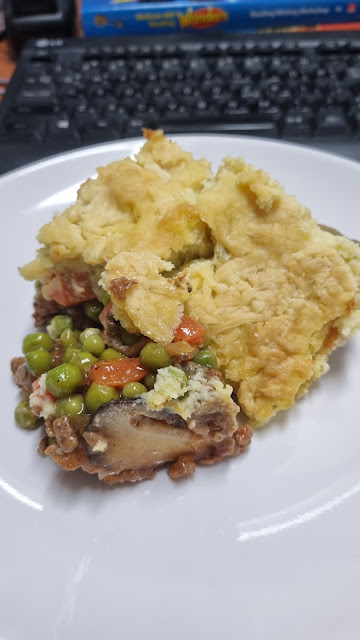 Here's the other, messier angle: 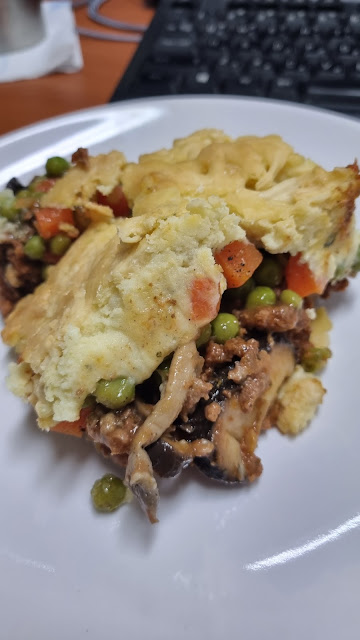 Everyone said they enjoyed the pie. My boss invited a coworker from down the hall to share with us since there was so much, and even by the time we had all finished lunch, there were still about four pieces of pie left. I'm boxing those up, and my coworkers can eat the leftovers tomorrow.* I'll be starting a 72-hour fast tomorrow, so I won't be able to join in, alas. Today, as it turns out, will be my final cheat day for January because, I confess, I cheated earlier this month when I really wasn't supposed to. I'm feeling bloated and nasty, to be honest, so a few days' fasting will do me good, and three days will be easier on me than five or seven days. When I eat again on Friday, it'll be something Newcastle-ish, like salad and chicken breast, which proved to be a winning dietetic combination last year.

I won't be cooking for the office again until March, at which point I think I'll redo my boeuf bourguignon with fusilli pasta—a huge hit the previous times I cooked it. In May, I have an ambitious plan to do extreme nachos with homemade corn-tortilla chips and two kinds of meat sauce—the standard beef sauce known to gringos everywhere, and a chorizo-sausage-based sauce that I hope will be a nice, fatty, greasy mess. One of these days, I'll have to try my hand at the birria that's currently so trendy. It looks amazing.

*Only one piece left now. I ate dinner in the office. Hee.