since I have no pics of Saturday's walk

Out of curiosity, I ordered the variety pack of Magic Spoon cereal, which is supposed to be grain-free, packed with protein, and keto-friendly: 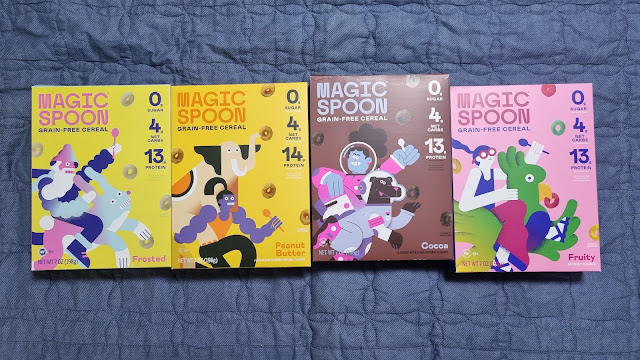 Of the four flavors in my variety pack, I can say that peanut butter and frosty are horrible. The complaints I read on Amazon.com, about how these cereals have a weird, chemical-y taste, apply most strongly to these two cereals. Chocolate is also a bit off, but it's kind of good, and the so-called fruity flavor is an exact match for Froot Loops. Anyone who's eaten Froot Loops knows the cereal doesn't taste natural at all, but if you ever had it during your childhood, you might like Magic Spoon's version, anyway. When I was a kid, our family was more into bland cereals like Cheerios, so I wouldn't eat the more sugary cereals unless I was staying the night at someone else's house. As you might have guessed, Magic Spoon cereals were developed primarily for people on keto who crave the flavors and textures of their previous life (this is the same urge that motivates the development of keto breads, pastas, cakes, etc.).

To sum up: I'd never buy the variety pack again given that 50% of the pack sucks, and while I'd consider buying the chocolate one again, I know I'd almost definitely buy the fruity flavor a second time. Oh, yeah: consistency-wise, I thought Magic Spoon mimicked normal cereal pretty well. I'd seen complaints of the cereal melting in milk and leaving weird, gooey lumps, but that's not what I experienced. Maybe I ate it too fast.

That said, I ordered this variety pack through Coupang, and it was hellaciously expensive ($25 a box—no joke), making this more of a full-on scientific experiment and less of a mere curiosity purchase. So given the astronomical price point, no, I won't be buying this cereal again. It also doesn't help that Magic Spoon cereal boxes are much smaller than average cereal boxes, making the cereal that much more expensive. All in all, I can't recommend Magic Spoon to fellow expats. If the cereal is more reasonably priced in the States, then go for it. Otherwise, I'll be sticking to more keto-style breakfasts (eggs, avocado, keto bagel, etc.).

Among the people I subscribe to on YouTube, some of them shill, occasionally, for Magic Spoon, and I now think they're all lying through their teeth, merely allowing Magic Spoon to sponsor them for the filthy lucre. I certainly wouldn't let the company sponsor me, and I'm not sure that I'd call Magic Spoon "a product you can believe in."